Who is Jackie Gage?

So how does one develop such a refined sound? As an emerging vocalist in San Francisco, one must look back to Jackie’s childhood to understand her roots...

Jackie is native of San Jose, California, where she grew up surrounded by a diverse music community—from cooing songwriters in coastal cafes, to soul-stirring gospel music in Baptist churches. Dionne Warwick’s Greatest Hits album played in the family car on repeat, and Jackie and her brother would choreograph dance moves to various  Ella Fitzgerald & Louie Armstrong duets in their free time. Ask her parents about their favorite albums to play? It would be a tie between Sade's Diamond Life and Unforgettable, with Love from Natalie Cole.

A piano was always waiting at the family home, and as Jackie’s love for music grew, so did her interest in writing music and trying her hand at the instrument. She would begin to write songs about her friends, about relationships, about her family… And as sad circumstances began to develop in the family home around the health of her mother, the piano became an instrument of solace and peace. She didn’t know at the time, but the more she gravitated towards creating music, the more comfort she gave to the Bay Area audiences she shared the music with.

As a 2014 Jazz Search West finalist, she was awarded performances at Yoshi’s and The Sound Room, all venues which have invited her to return multiple times to share her music. Festivals like San Jose Jazz Summer Fest, Fillmore Jazz Festival, and Berkeley Juneteenth also welcomed Jackie’s music into their programming year after year.

She led 2 weekly residencies in New York; one at the legendary Smoke Jazz & Supper Club, and second at The Marriott Pulse.

And now, Jackie has returned to her home state of California, excited to grow, to create new music, and inspire listeners with the stories she's learned in her time away from home. She currently shares virtual concerts and select songs for listeners all around the world; has hosted private events for the likes of Airbnb and Anthropolgie; and hones her musicianship as a student under the tutelage of Kim Nazarian of the New York Voices, Roberta Gambarini, and Julie Bonk.

To feel is to know, and from the moment you feel Jackie Gage's velvet, honey voice melt into any song, it's hard to not to know that her sound, her voice, and her music are bringing her all the way to the top.

BLACK SD MAGAZINE
"Her music continues to unite us even in such isolating times."
(link)

METRO
"...an authentic piece of poetry, one that clearly originated from the heart, the mind, the soul and the streets."
(link)


SAN JOSE MERCURY NEWS
"The highlight for those who got in was hearing San Jose native Jackie Gage debut 'A Secret Place,' a heartfelt ballad about her hometown, at a jam-packed Cafe Stritch concert on Saturday Night."
(link)


AFROPUNK
"It's soulful, inventive, playful, and powerful. It's a truly rare work of art."
afropunk.com/profiles/blogs/afropunk-premiere-stream-jazz-soul-singer-jackie-gage-s


THE BAY BRIDGED
"Definitely making waves in her craft… ahead of her stellar musical resume, what makes Jackie Gage stand out is her incredibly soulful voice.”
thebaybridged.com/2015/12/01


JAZZDEGAMA
"Jazz is Jackie Gage. She is a singer who is far in advance of her years with a flawless voice, and even more flawless diction and sensuous without being self-conscious."
jazzdagama.com/cds/jackie-gage-siren-songs


ALL ABOUT JAZZ
"Her rendition of "Comes Love," displays a maturity in her song selections as well as confidence in her ability to cover such a perennial classic with authority."
allaboutjazz.com/siren-songs-jackie-gage-first-orbit-sounds-review-by-james-nada


AXS
"The album is pure ecstasy... a sleek, supple voice that seems to float out of nowhere..."
axs.com/jackie-gage-torches-jazz-in-debut-siren-songs-75961


"Jackie Gage sounds like she has been doing this for 30 years and yet she has a fresh and sweet approach that sounds almost innocent."
by Travis Rogers, Jr.
travisrogersjr.com/music-reviews/jackie-gage-sings-her-siren-songs


THE JAZZ WRITER
"A jazz vocalist who thinks outside the proverbial box stands apart from those who simply cover the standards..."
smooth-jazz.de/Woodrow/Gage/SirenSongs


CONTENT MAGAZINE
"The jazzy and soulful Jackie Gage has been working hard, not only to develop her own talent and play gigs throughout the Bay Area, but she has also been a positive force in the South Bay music scene."
content-magazine.com/home/jackie-gage 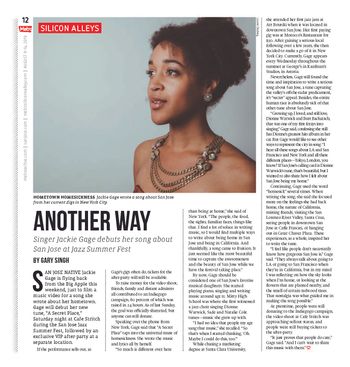 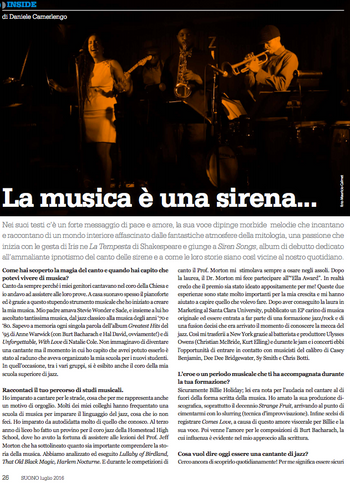 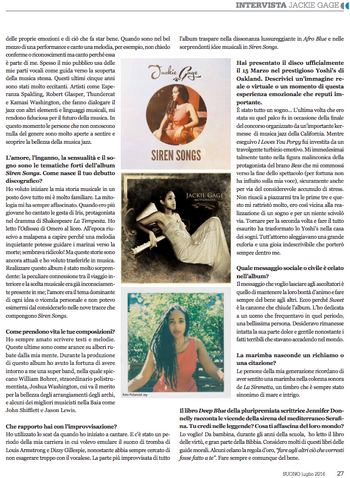 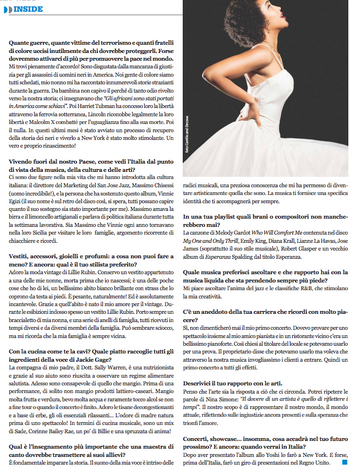 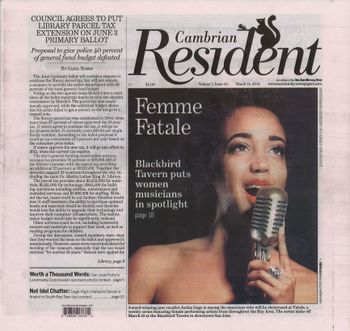 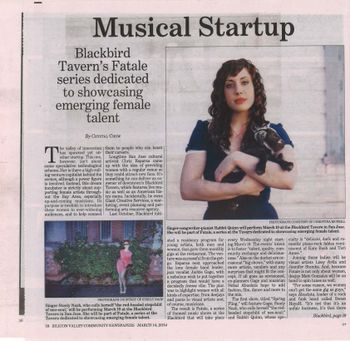 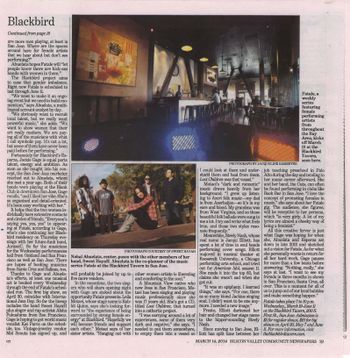 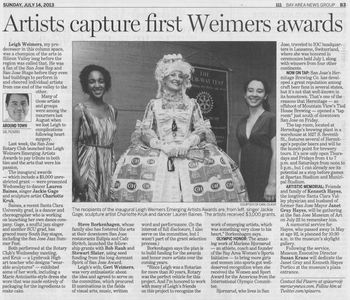 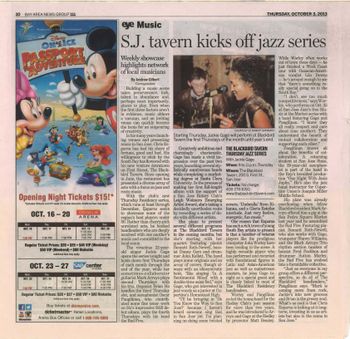 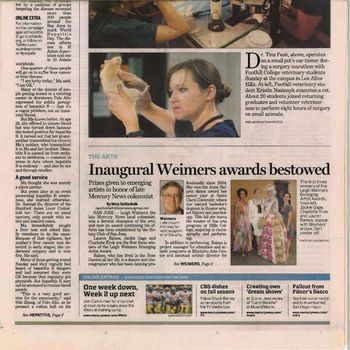 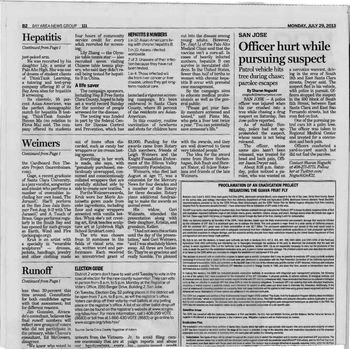 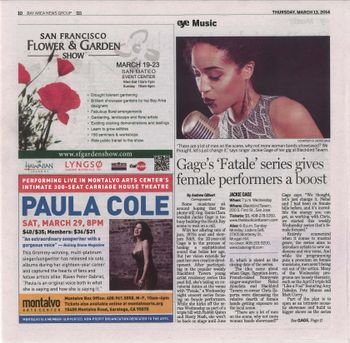 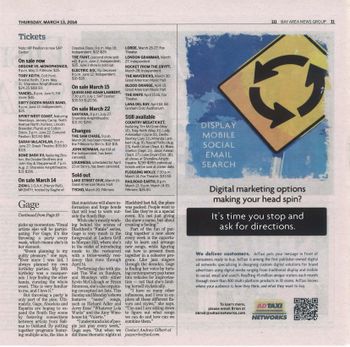 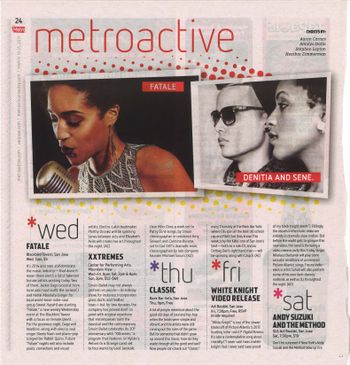 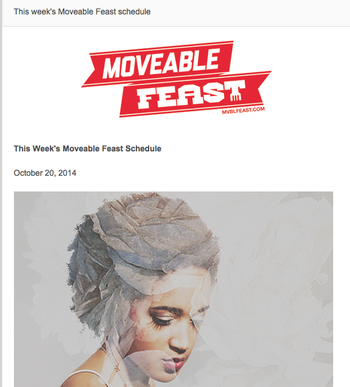 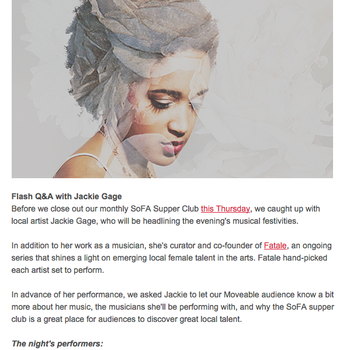 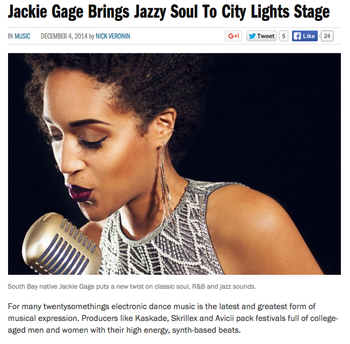 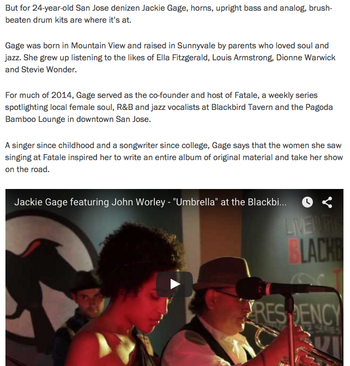 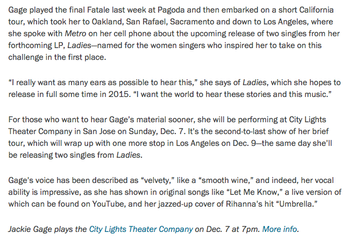 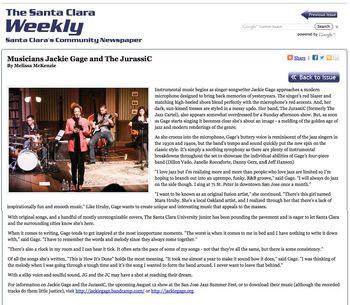